Solomon the Wise2 saw the prince of the demons of darkness, who roared like a [storm] cloud and shrieked like a vishap.3 Solomon said, “Oh foul and cursed [one], what are you?” The demon said, “I am the prince of demons and the mother of all evils. I am [the one] who brings enmity among brothers. I bring discord, quarrel, and disorder. I am [the one] who enters into the heart of mankind, and bringing [these] I sow the seeds of evil desire, from which fornication is born.”

Solomon said, “Arise that I see [you].” And it rose [higher] than a mountain, and intended to fall upon him.

Solomon said, “Become small.” And it became smaller than a grain of mustard. And Solomon took it and placed [it] on [his] right-hand ring. And he placed a piece of the tablets of Sinai on top of the gemstone of his ring.4

And now, by the Ark of Noah, and the Ladder of Patriarch Jacob, and the Ark of Moses, and the Rod of Aaron, and the Prayer of Kononos,5 all the evil demons and satanic evil devices shall be expelled and impeded from this servant of God (name). Amen. 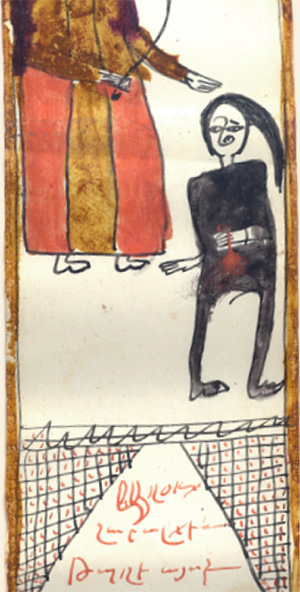 1 The demon in the illustration accompanying this part is an al (ալ) or alk‘ (ալք), which enters into the wombs of pregnant women to kill them or their unborn children. Illustrations of alk‘ often depict them holding the innards of their victim. For more on these demons, see Part 26 and Note 1 thereto. Shown here is a portion of a handwritten hmayil in the possession of the Zohrab Information Center, with a similar illustration of an alk‘ being confronted by sword-bearing Saint.

2 Legends of Solomon the Wise and his demon-exorcising ability go back to antiquity. Flavius Josephus, the 1st century a.d. Roman-Jewish historian and military leader, states that Solomon was able to expel demons, and that he personally witnessed exorcisms that were performed using Solomon’s method and incantations:

Now so great was the prudence and wisdom which God granted Solomon that he surpassed the ancients, and even the Egyptians… And God granted him knowledge of the art used against demons for the benefit and healing of men. He also composed incantations by which illnesses are relieved, and left behind forms of exorcisms with which those possessed by demons drive them out, never to return. And this kind of cure is of very great power among us to this day, for I have seen a certain Eleazar, a countryman of mine, in the presence of Vespasian, his sons, tribunes and a number of other soldiers, free men possessed by demons, and this was the manner of the cure: he put to the nose of the possessed man a ring which had under its seal one of the roots prescribed by Solomon, and then, as the man smelled it, drew out the demon through his nostrils, and, when the man at once fell down, adjured the demon never to come back into him, speaking Solomon’s name and reciting the incantations which he had composed… (Josephus, F., Jewish Antiq­uities, Vol. I, Books 1–3, translated by H. St. J. Thackeray, Cam­bridge, MA: Loeb Clas­sical Library 242, 1930.)

3 The vishap (վիշապ) is a dragon in Arme­nian mythology and folklore, often associated with storms, whirlwinds or storm clouds. Manuk Abeghyan (1865–1944), the great scholar of Arme­nian folklore, states:

Storm snakes play a large role in Arme­nian folk beliefs. They are called vishaps (“dragons”), an old and frequently used word. It is a Persian loanword which is popularly pronounced as ushap. Sometimes actual snakes if they are very large, are also called dragons. This, however, is merely a transferal from the storm snake to the real one. Many legends concern themselves with the battles waged by mountain snakes against each other which have led to traditions of snakes in the air fighting over their king’s crown thereby causing a change in the weather.

In all stories told about the vishap it appears as the personification of a storm, whirlwind, or storm cloud. Its physical nature is quite clear, even if it is somewhat obscured in certain folk tales. From ancient times to the present the dragon represents a whirlwind or storm cloud. Anania Shirakats‘i wrote about the meaning of vishap hanel (“to remove / pull out a dragon”):

“The whirlwind is a wind that goes upward. Wherever there are abysses or crevasses in the earth, the wind has entered the veins of the earth and then having found an opening, rushes up together in a condensed cloud with a great tumult, uprooting the pine trees, snatching away rocks and lifting them up noisily to drop them down again. This is what they call pulling up the dragon.”

“They assert that the vishap is being pulled up. The winds blow from different directions and meet each other. This is a whirlwind (p‘ot‘orik). If they do not overcome each other, they whirl round each other and go upward. The fools who see this, imagine it to be the dragon or something else.”

Just as the Greek mythological figure Typhoeus represents a whirlwind, water spout, or generally a storm and is also a dragon-like being whose fiery breath and thick clouds fill the sky, so too the Arme­nian vishap is a monstrous mythological being which is simultaneously a whirlwind or storm. As a storm figure, it ascends or is drawn up to the sky and dwells in the lofty mountains where whirlwinds intersect, just as among other peoples the storm dragon is associated with chasms and caves. As a being of storms or a being made of clouds, the dragon also frequently changes its form. For example, according to Eznik it appears sometimes as a snake, sometimes as a man, sometimes as a mule or camel, or as a hunter pursuing game on a swift steed.

Grain which has been harvested may also be stolen from barns by the vishap, and then carried off on pack animals. The same story about removing a vishap is told by many other peoples about a storm cloud or a troll which personifies a whirlwind. In the Middle Ages it was said about the vishaps that they sucked the milk from cows. The same was said about the Russian Ljeshi, who were both forest trolls, fiery dragons and other beings as well as personifications of a whirlwind. Among the Arme­nians as other folk, a damaging breath is attributed to the storm dragon. Thus in a murky passage in Eznik we read:

“Moreover, if the vishap should be raised up, it is not by those called oxen, but rather by some hidden power, at God’s command, so that its breath not harm men or animals.” (Abegyan, op. cit. in Part 12)

4 Not unlike a djinn bound by a magic ring, Solomon binds the spirit by placing it in his ring and using a piece of the tablets of the Ten Com­mand­ments, in the manner of a written magic charm, to lock the spirit in. The Ring or Seal of Solomon, in many traditions dating back to antiquity, is a signet ring used by Solomon to control or bind demons. In some narratives, the ring was engraved by God and given to Solomon by the archangel Michael, and had one part of the ring made of brass, used to seal written commands to good spirits, and another part made of iron, used to seal commands to evil spirits. In the Testa­ment of Solomon, a magico-mystical narrative with early forms that date back to the 3rd century a.d., Solomon uses the ring to control demons and conscript them to construct the Temple of Jeru­salem, which according to legend was built without the use of tools. (Cf. 1 Kings 6:7, “And the temple, when it was being built, was built with stone finished at the quarry, so that no hammer or chisel or any iron tool was heard in the temple while it was being built.”)

5 Armenian prayers (incantations) of protection against demons often list a number of “holy” objects that are used in a magical way to expel or bind demons. In addition to those included here, one may find the Milk of the Holy Virgin, the Harp of David, the Tablets of Moses, and the Nails of Christ, to name a few. Here, the hmayil includes the Prayer of Kononos (կոն­ոն­ոսի աղօթ­իւքն) as a means to entrap or control demons, in a manner similar to the Ring of Solomon.

The late Prof. Sargis Haru­tyun­yan (1928–2018), who was a member of the Insti­tute of Arche­ology and Ethno­graphy of the National Academy of Sciences in Arme­nia, discusses St. Kononos as follows:

Kononos the evil-spirit-expeller (Conon of Isauria)… destroys the pagan shrines with the power of his word and makes the demons inhabiting them obey and serve him. … In Armenia, the monastery of St. Kononos was located in Sasun (Hazzo), where, according to legend, there is a large army of demons, “filled into karask‘ [large clay jars] and buried under the ground, sealed closed until the day of judgment.”

The activities of St. Kononos in expelling the demons, subjugating them, [and] locking them in karask‘, are almost identical to the similar actions of Solomon the Wise, for which he received the epithet of evil-spirit-expeller – demon-expeller. (Harutyunyan, op. cit. in Part 12.)

The monastery dedicated to St. Kononos, near the village of Norashēn in Sasun (now part of Batman province in southeastern Turkey), was visited by the late-19th-century ethnographer Manuel Mirakhorian. Included in his Descrip­tions of Travels is the following:

On the wall of the church located on the left side of the monastery gates is the tomb of Saint Kononos. It is a plain tomb, visited by Armenian, as well as Kurdish pilgrims. The Kurds call it the tomb of “Sheikh Eomer”, and they are granted a special area in the monastery to pray. There is also an area where the insane are brought, and are restrained using special iron chains. After remaining enchained for a few days, they are thought to have taken “his murad” [մուրատ < Turkish murad < Arabic murrād, “desire, longing”], and are released.

In the southern corner of the church is a mound of dirt, rising to a height of about a meter, and large enough for a man to sit. It is said that “the chief of devils” was buried there, “condemned to chains and imprisoned by Saint Kononos.” (Mirakhorian, M., Nkara­grakan ughevor­ut‘iwn i haya­bnak gawaṙs Arev­elean Tach­kastani [Descrip­tions of Travels in the Arme­nian-Popu­lated Regions of Eastern Tachik­stan (Anatolia)], Vol. 3, Constan­tinople: S. Gh. Partiz­panean, 1885 (in Armenian). Online at digilib.aua.am)

Interestingly, Manuk Abeghyan states that the alk‘ “have a king who lives chained and constantly shrieking in the abyss, buried up to the neck in lead” (Abeghyan, op. cit.), not unlike the chief of devils (սատ­անայի պետն) buried in chains at St. Kononos monastery.